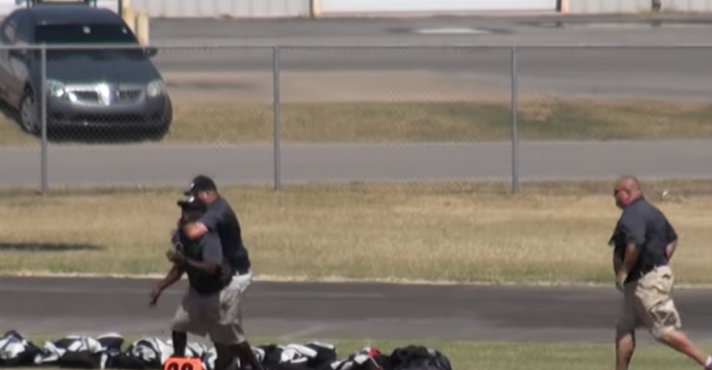 When it comes to youth football, it definitely can get competitive. Ask any child, and they will tell you that yes, they do indeed want to win the game. However, for whatever reason it’s usually the parents and the coaches who take the game way too personally at times. Indeed, there are few people who take youth football nearly as seriously as some of the violent coaches that are located in Tulsa, Oklahoma. One example occurred during a youth football game of third graders, of all people, and it was an incident where one father (who, incidentally, is also an assistant coach himself) started throwing punches and attacking another coach simply because he wouldn’t allow his son into the game!

News 9 from Tulsa was the first news crew to report on this violent outburst from the angry dads. Apparently, the first coach (name withheld) was getting more and more furious by the minute at the other coach simply because he refused to put the boy into the game. He became quite agitated because he thought that the other coach was degrading his son and not recognizing his talents. Thus, Coach A felt the need to “defend” his son, so he put the other coach into a headlock and tried to choke him completely unconscious.

This particular rampage occurred while the winning team had dominated, building a lead of 31 to 6. Now, you would think that if there was going to be an outburst, that it would from a parent or a coach on the losing side of the ball game. Uh-uh. This came from the winning team, folks. Simply put, the coaches started fighting because one of the coaches didn’t think his son was getting enough playing time. Coach A told the main coach that he wanted his son in the game, but the main coach felt the boy wasn’t ready to play.

While most people would just think something to the effect of, “Oh well, at least we’re winning…”, this coach literally let the other coach have it! Moreover, footage from this attack was uploaded to the team’s YouTube channel called Video My Life. They described the event in the following manner:

“It was a third-grade football game, and it was a 31-6 contest with just about two minutes to go. Needless to say, the coaches on the winning team decided to take the competition to another level. These coaches are all volunteers, and the great majority of them are doing a great job. However, this is definitely a blemish, and we should let this video be a reminder that you should keep your emotions in check. Remember that it’s just a game.”

Of course, a little background information is necessary. Apparently, the coach told the other parent-coach that his son is too slow, and that he’s “not ever going to run the ball.” Now, most individuals would just ignore this rude comment, but apparently this man’s son has autism, and the comments threw this boy’s parent into a violent rampage. Because he was not able to control his temper, he attempted to choke the other coach during the game. Many of the viewers of this incident said that it was “sad” that the parents were fighting at a football game for seven and eight-year-olds.

“Fighting at any little league football game should mean that if the participants are coaches, they should no longer be allowed to coach pee wee football ever again, especially when it involved 7 or 8-year-olds,” posited one commenter.

So, in conclusion, what do YOU think? Do you think that these coaches in Tulsa should still be allowed to be involved in coaching after these incidents? Let us know in the comments below!