It’s good to say that there are times where even those who are supposed to be “experienced” at being politically correct don’t quite have it right either. Take actress Amber Heard, for example. She had just gotten done testifying at Johnny Depp’s defamation trial in London and she decided to take a holiday in Turkey. However, while she might have enjoyed being a tourist, she didn’t quite get the cultural mores right, to say the least.
First of all, she posted her first picture on Instagram, and it showed her wearing a pink hijab, complete with a button down shirt and a silky white blouse while posing outside a well-known mosque.

Of course, it wasn’t soon after that she deleted the picture because individuals who have been around the block a time or two regarding the Muslim faith started slamming her very harshly in the comments section.

“When you decide to visit a religious building, it’s important to fully understand all of their customs. You weren’t wearing your scarf correctly because it didn’t cover your hair, you had nipples that were showing through your blouse, and you had filmed and photographed people in the middle of worship,” one poster commented.

She tried again. This time, she uploaded a picture that had the caption: “Spent the day just looking around Istanbul’s mosques and just taking in the magic. Couldn’t be more enchanted with this gorgeous city…” 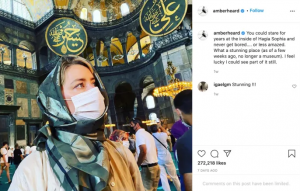 Of course, this was her second attempt at trying to be culturally appropriate, and this time she did quite a bit better. She actually had a hijab that fully covered her neck, and it was complete with a headscarf and a face mask as well.

There are more important things in the world than whether a Hollywood actress understands the culture of Turkey, but what do you think about how Amber Heard was schooled in this instance?