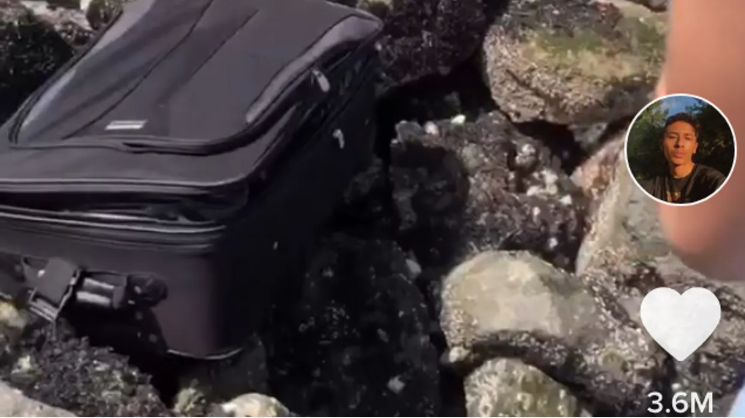 A couple of teens were looking to have a good time and were trying to make a TikTok video, but they got way more than they bargained for when they found a suitcase that appeared to have human remains inside of it. They found this morbid suitcase on a Seattle beach on Friday, and the Seattle Police Department confirmed it in their press release. Seattle police staff confirmed that several of their detectives located numerous bags that had human remains on them near Alki Beach in the West Seattle neighborhood. This also included the bag that these teenagers spotted. Police also noted that they found one other suspicious bag that was just floating in the water.

Of course, the way that this came about was based on the TikTok account entitled “@ughhenry”, which posted a video regarding the incident. The video appeared to show the exact moment when the teenagers came across the suitcase. “Something traumatic happened and it really changed my life checkkkk,” was the description for the video. One wonders why they felt the need to post something like this on TikTok, but I digress. However, they did call the police so I’ll give them that, at least.

“Me and my buddies found this black suitcase, and we were kind of joking around that maybe it had some money in it,” the rest of the caption read. However, the curious teens got more than they bargained for when they were finally able to open the suitcase. “As soon as we opened the suitcase, the smell was just god awful overwhelming.”

The video shows a girl flinging open the suitcase and then she immediately jumps back as she notices the black garbage which appears to have something in it. Interestingly enough, subsequent footage showed that the teens were driving by the crime scene, and then noticing that it had been packed with police cars and a firetruck.

KOMO-TV reported that the first bag was immediately discovered by police, but then they quickly noticed another one floating in the water and so they tried to retrieve it.

“I saw the police come out on the lake with a boat and an inflatable boat,” local Seattle resident Steven Buty said. “They took two plastic bags out and they took two bags from the water.”

The police were interviewed, but they haven’t said whether they think that the bags washed up on shore or if they were just placed directly where they sat upon the beach. The remains are now being examined and analyzed by officials at the King County Medical Examiner’s Office.