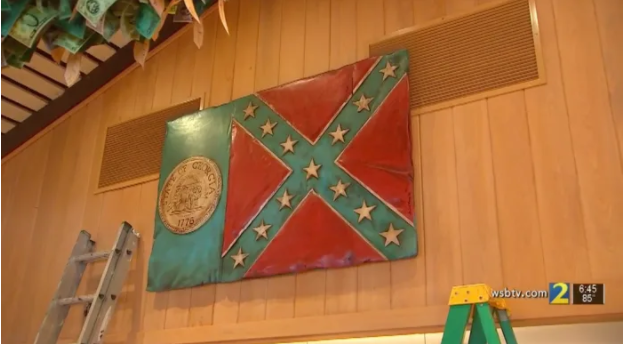 As owner of the Georgia-based Buckhead’s OK Cafe, Susan DeRose is used to having to make difficult decisions for her business. Her most recent decision is one that will stick with her for many more years to come.

She recently decided that she should remove the Georgia banner and flag that had been on one of the main walls of her restaurant for three decades. This particular part of the decor had been called “offensive” over the years, but there hadn’t ever been anything done about it. Until now, that is.

When she was asked why now, she had a rather quick response: “I thought, ‘Well, it’s just time to go ahead and take it down. I think we should auction it off because it’s definitely something that offends people.’ So, we decided to take the banner and flag and the money made from the auction will go to the police force.'”

Isabel Johnson is a student at Georgia Tech and a leader for Buckhead for Black Lives, and she commented that she was happy to see the flag go.

“I think it’s the right gesture in the right direction,” she said. “I’m certainly glad to see steps being taken to put some reform in this restaurant and make it just a bit more friendly for all of its customers.”

Johnson and other members of her chapter marched through Buckhead the day prior to this and interestingly enough they saw yet another sign that was also taken down. It read: “Lives that matter are made with positive purpose.” However, we do digress a bit.

Getting back to the restaurant flag, there is no question that it has been a center of controversy for many years within this small town. Some of the locals loved it. Yet, at the same time, there were some people who hated it.

Even though witnesses clapped when the sign was taken down, there were a few members of the local media who also asked DeRose what prompted her to do it now. “I had it up because it meant a lot to me. It meant a lot to me because of what happened in 1964 when women finally got their civil rights. Of course, I now realize that a lot of people don’t agree with that and we were even getting threats of violence. There were some people who have even called with threats of arson. ‘Well,’ I thought, ‘In that case, I had better go ahead and just take it down.'”

However, there are still quite a few people who feel that even this gesture isn’t good enough. One such individual would be former Georgia State Senator Vincent Fort. He not only maintained that he wasn’t satisfied with the move, but that the restaurant owner should apologize for all the years that the sign was up.

“This sign was nothing more than a calculated move to insult black people, and not just black people, but their allies as well,” he said. “This doesn’t change the fact that there are a lot of white folks that even to the very day it was taken down would see it and say, ‘Hold it.’ These restaurant owners are so offensive and have been so calculating for so long that I’m not willing to give them a break just yet.”

Fort also had a number of things to say about DeRose’s plan to auction the flag off. “We feel like they need to do the right thing regarding this sign and I can’t say I’m convinced that taking the symbol down and giving the money to the police is the right way to go, nor is it the only thing they should consider doing, either.”

Of course, local Black Lives Matter activist Johnson said she felt that removing the flag was a positive step forward. “I think it’s a good starting gesture for sure,” she said. “Of course, I think a lot more should be done when it comes to reforming how everyone is treated.”

What do YOU think about this Georgia flag controversy?