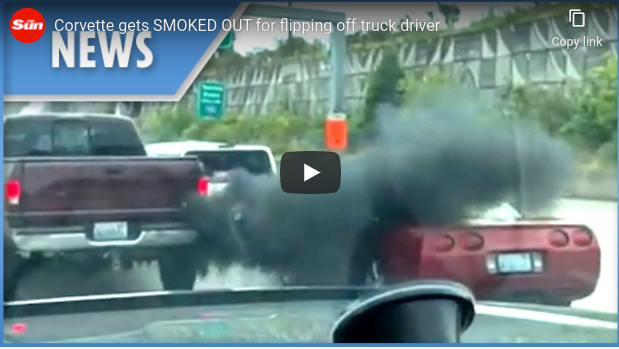 Let’s score one for working men everywhere! All of the spoiled rich kids had better be on notice if they see too many Dodge pickup trucks going down the Tacoma interstates. These pickup truck drivers just aren’t going to sit back and take road rage; they will do something about it! Such was the case for someone driving a Dodge truck who got flipped off by the drive of a Corvette.

In a nutshell, after the operator of the Corvette blocked the driver of the Dodge, the pickup truck simply sped up and then covered the Corvette in a tremendous cloud of smoke. Immediately after that, the Corvette driver changed his mind and let the Dodge driver in. I guess he showed that spoiled rich kid who’s boss!

The whole incident was filmed by a passenger in a car that was following the pair. After it happens, the person filming the incident burst out laughing. They uploaded the video to YouTube, where it quickly went viral with over 530,000 views and 7,200 shares.

“We were driving through traffic and I just happened to be filming when this incident happened,” the person who filmed it said. “I saw the Corvette flipping off the truck, and then that’s when this guy totally sped up, totally coaling the Corvette!”

That’s definitely one case where road rage didn’t pay off in the least. I don’t know; perhaps the driver of this Corvette should think about some anger management classes?