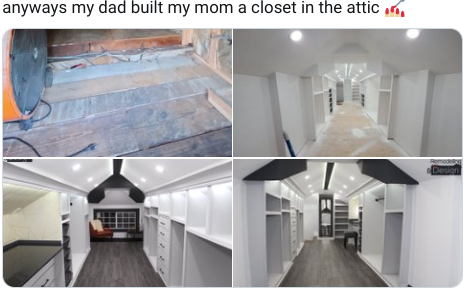 There is no question that the Cabrera family is one inspirational group, not just to their own friends, but to people all around the world as well. All it took was one simple decision from the daughter, Joserin, to take pictures of the amazing transformation her dad performed of the family’s attic. She got the ball rolling by sharing these pictures on Twitter.

On June 22, Joserin shared the first four pictures, and this first contribution alone shows that the transformation of this attic was nothing short of remarkable. Simply put, this girl’s father has some incredible remodeling skills. To top it all off, she said: [A]nyways, my dad made the attic into one giant closet for my mother.”

Joserin shared at least three different stages of her father’s massive project: there was a before; a during or “in progress” stage; and a couple of pictures detailing the result as well.

Rodolfo Cabrera detailed the whole entire project when he talked to House Beautiful, saying: “In all honesty, it all started because my wife and I needed some more space to put our clothes away. I went up to the attic one day, and I immediately thought, “Wow, look at all this empty space! We could totally transform this extra space into something else.”

Cabrera started off this project by cleaning his attic, and then he and his team got to work to do the framing within the attic as well. He and his employees wanted to go with a totally updated electrical system behind the walls before they hung the drywall. They also wanted to plaster the walls, getting them ready for recessed LED lights.

Cabrera noted that the hardest of doing this project for his wife would have to have been the stairs, due to the fact that they were attached to just one wall. He said he had no choice but to add support to one side, otherwise it would be impossible for the stairs to maintain support. Of course, Cabrera’s tweet went viral, and along with it he decided to share pictures of the stairs simply because it is just as amazing as the rest of his project.

Cabrera also made certain to install built-in shelves and he moved some of the furniture out of the home’s master bedroom. He installed a split AC unit so that it would stay cool, and he definitely invites you to see more of his incredible design. Check out the Remodeling and Design company on their Instagram account.