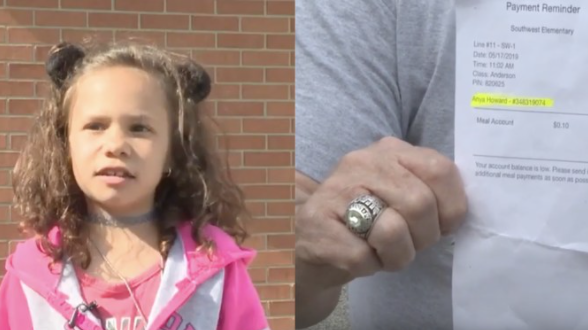 6-year-old Anya Howard was “lunch shamed” and had to return her food at her school cafeteria after she didn’t have enough in her school lunch account to pay for it.

Dwight Howard is Anya’s grandfather, and he has urged district administrators that they should review their policies regarding cafeteria issues.

Anya is a student at Southwest Elementary, and she had to trudge to the back of the lunch line to get a peanut butter and jelly sandwich. She said that several of her classmates laughed at her and it made her feel “sad.”

According to News 8, Anya not only had to make the “walk of shame”, but she had to do it past 20 students, with many snickering and outright laughing at her because of her inability to pay. Anya’s grandfather said this was “humiliating and unnecessary.”

“When she was talking to me about it, she wasn’t just sad, she was embarrassed, too,” Dwight Howard said.

“The school waited until there was a dime left, then they denied her the lunch that she would have been served and that she tried to pay for, and then they made her go back to the line to get a PB&J sandwich,” the perturbed grandfather said.

Of course, Greenwood Community Schools Superintendent Dr. Kent DeKoninck did his best to do damage control on their end. First of all, he stated that parents and guardians are given reminders when the lunch accounts only have $5.00 remaining in the balance.

Second, he sent a statement to News 8: “It isn’t an uncommon occurrence for more than one student to be served the alternate lunch during any given day. Whenever this occurs, our staff tries to handle it as discreetly as we possibly can. Of course, we do allow our students to charge up to two hot meals before they have to go with the alternate meal.”

That might seem all well and good, but Anya also brought home a note around that same time that said that the school district was soon going to do away with giving students the ability to charge their hot meals.

Although Dr. DeKoninck was adamant that Anya’s family had never contacted him regarding the note she sent home, it seems that someone dropped the ball here. It’s all well and good if the man has a doctorate, but how about some good old fashioned common sense? It’s time to work on changing your policies so another student isn’t embarrassed the way that Anya was.

What do you think about this embarrassing first-grade lunchroom story?