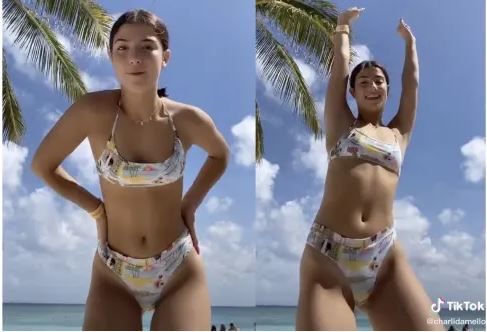 When 15-year-old TikTok Hype House member Charli D’Amelio posted a video of her dancing to “Sugar” by Brockhampton while vacationing with her family in the Bahamas, she wasn’t prepared for the backlash that would follow.

She handled herself well regardless.

The first individual who commented on the TikTok video was that ever-present Perez Hilton, who asked this rhetorical question: “Does anybody else feel that it’s inappropriate for a 15-year-old girl to dance to a song like this?”

Charli simply responded by saying, “Sorry come on I’m just trying to have a little fun! :-)” Perez did do a little bit of backtracking later.

Unfortunately, that wasn’t the end to the backlash. Another person commented, saying they thought the video was a bit too “sexual.”

D’Amelio fired back: “Well, well…Am I not allowed to have a good time and dance to trending songs? I’m kind of confused why you would care to even post about this.”

Madi Monroe was another TikTok celebrity who was vacationing with D’Amelio, and she too was harrassed for her dancing in this video. However, both Charli and Monroe’s boyfiend, Christopher Romero, came to her defense.

D’Amelio’s reply was very strong: “Everyone needs to shut the h- up about people’s bodies. It isn’t okay, because my friend Madi is gorgeous inside and out and it hurts to talk about people like this.”

She said that if her wearing a swimsuit at a beach was a problem well then it just “sucks to suck, doesn’t it?” It’s good to see she’s not losing any sleep at night over this new brand of cyber-bullying.

Her father, Marc D’Amelio, also weighed in on the incident: “We’ve talked to quite a few people who have the training to know that this is just part of the job of being a social media celebrity. We turn a blind eye to the hateful comments and bullying, but of course for the creepy comments we always get the authorities involved.”

Either way, Charli’s still in high school, so she just as well keep doing her thing. With comebacks like that, you never know, maybe she will go to law school when she gets older.

2 thoughts on “TikTok Celebrity Receives Backlash Over Her Bikini Video, But She Responds With a Great Comeback”