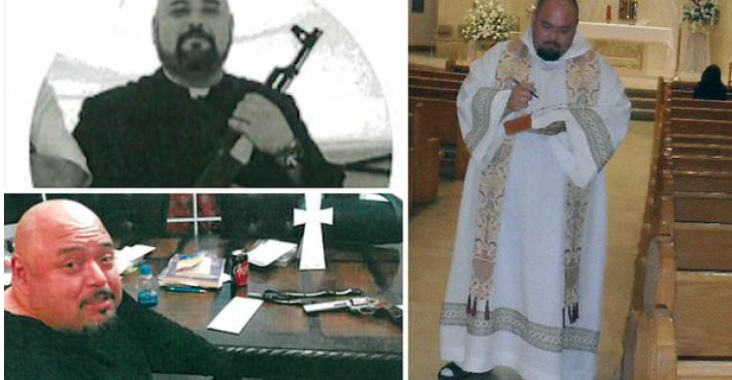 A Catholic priest from the Diocese of Fresno is in some serious hot water after he was banned from St. Joseph’s Church in Selma, California after several parishioners caught him carrying an AK-47 and being “habitually under the influence of alcohol and marijuana.” Father Guadalupe Rios has now lost his title, and the dirty dealings and double life of this priest started to unravel quite quickly. Come to find out, Father Rios has many deadly links to drug trafficking, guns, gangs, drugs, and alcohol abuse.

This is when the Diocese of Fresno filed a restraining order against this gun-toting priest. Now, Brother Rios is not only no longer a priest, but he is not allowed to step within 100 yards of St. Joseph’s Church. Indeed, the parishioners are even working to remove the former priest’s name for their marquee.

Officials believe that the priest is armed and probably very dangerous. The Fresno Diocese obtained this restraining order because they wanted to protect the other church employees, including the Bishop Joseph Brennan. Needless to say, the Diocese is deeply concerned that the priest might return and wreak some terrible havoc on the innocent parishioners of the church.

One of the main reasons why Father Rios’ many different sins were discovered is because he had posed with his cache of weapons, including pictures of him with an AK-47, an AR-556, and a .357 Magnum, and he posted these images online. Parishioners viewed the content and many of them were terrified of him bringing all of these firearms to the church on any given Sunday.

Besides his gang connections, gun-toting activities, and his abuse of drugs and alcohol, Father Rios is also being accused of abusing his church secretary. According to various reports, he established a romantic relationship with her and it went on in secret for five years. Throughout the entire relationship, Father Rios would physically and emotionally abuse this woman because he wanted her to keep his nefarious love affair secret.

The secretary admitted that the abuse that she suffered at his hands was unbearable. This was exacerbated by the fact that Father Rios was under the influence of drugs and alcohol. He would even become suicidal when was with her, with him once pointing a gun to his head and her and saying that she was going to end both of their lives.

“Mr. Rios and I were in his rectory and he put a gun to his head in front of me. I started to cry out in shock, and I asked him what he was doing,” the secretary wrote in a church declaration. “He said, ‘either I’m going to die, or you are, or we both are.’ Father Rios has a past as a gang member and he has many gangster friends that he associates with. Due to that, I am afraid for me and my family’s safety.” The secretary said that she feared she would be retaliated against when she made her allegations public.

Additionally, court records also revealed that Father Rios had been arrested in 2016 for a DUI infraction in 2016. During that incident, it was revealed that his blood-alcohol level was measured at a whopping 0.19, which is almost twice the legal limit in California.

When they approved the restraining order on Friday, there is no question that church employees felt safer. Police also came into the rectory and seized the priest’s assault rifle and his Magnum firearm from the church lockboxes.

What do YOU think about this misbehaving Catholic priest?