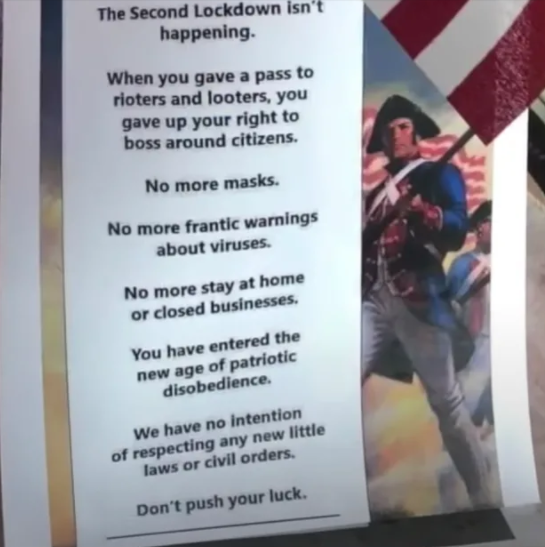 Cary James is the owner of the Cleveland-area Stahl’s Bakery, and she recently had to take down a “controversial” sign due to a litany of online complaints. What, pray tell, do you think that the sign said?
Do you suppose Ms. James said something that upset the liberals? Maybe the sign was deemed racist? No, none of the above. James’ sign actually said that the United States had no right to criminalize small businesses over this pandemic and give “rioters and looters” a free pass.
Even though her sign warned of “patriotic disobedience” in regards to supporting small businesses, James made it clear that she wasn’t aware of any complaints until 5 On Your Side Investigators showed them to her last Tuesday Afternoon.
“Not a single word,” she said. “Absolutely no one talked to us. No one called, complained, or anything else that I could see.”
This sign these internet trolls were complaining about read, “The second lockdown isn’t happening,” and it warned that “when you gave a pass to rioters and looters, you gave up your right to boss around citizens.” It also said, “No more masks and no more frantic warnings about these viruses, and no more stay at home or close businesses.” The signed concluded, saying, “We have no intentions of respecting any new little laws or civil orders.”
Interestingly enough, James feels that she has to give credit where credit is due. She herself seen this sign online and was impressed by it. So she printed it off and put it in her bakery window. The line regarding “looters and rioters” is what appealed to her the most.
“If we are going to allow rioters and looters to run roughshod over this country, and not saying that is wrong, and then at the same time we aren’t allowing small businesses to stay open, that is something I absolutely have a problem with,” she said. “Small businesses are something that our economy is based upon. You shouldn’t turn the small businesses into criminals by forcing them to close.”

When James was shown the online comments, she covered the sign and replaced it with a different one. This one read: “America, land of the free because of the brave.”
This controversy comes on the heels of Kent’s city council planning on voting on whether it should be mandatory for masks to be worn in public in their town.
Jerry Fiala is the mayor of Kent, and he said that he had witnessed “overwhelming support” for the proposal.
“We want to take the steps to get this done because of the concern we have about the safety and health of our city. We also want to see businesses continue to be able to stay in business. If some of these businesses are required to shut down yet another time, many of them may be forced to close their doors completely.”
Did James’ bakery sign strike a nerve? She believes it did, simply because peope are in a “panicking” mode over the COVID-19 virus. However, she said she was going to let her customers decide whether they should wear face masks or not.
“I won’t be forcing anybody to come in,” she said. “If someone’s uncomfortable with that, there are other businesses. Of course, you are more than welcome to talk to me and we could work other arrangements out.”
What do you think about the sign this woman put up in her bakery? Comments are always appreciated!

7 thoughts on “No Freedom of Speech for Her: Bakery Owner FORCED to Remove “Controversial” Sign After The Internet Freaks Out”