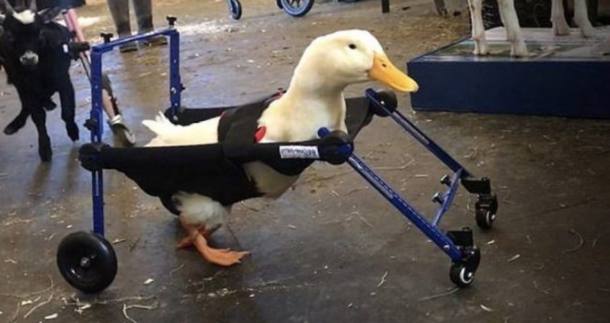 When a duck named Merlin was first born, it immediately became evident that he was in for a very challenging life. He had a defect in his left leg, and it appears that his prospects for a quality life seemed very bleak.

However, things started to turn around for Merlin when he was adopted last fall by the loving folks at the Goats of Anarchy Sanctuary in Annandale, New Jersey. The experts at this sanctuary quickly realized that Merlin wouldn’t be able to accomplish very much in his waterfowl life if he didn’t have the ability to waddle. Thus, the Goats of Anarchy Sanctuary contacted a company named Walkin’ Pets in Amherst, New Hampshire to see if there was anything they could do for Merlin.

Walkin’ Pets is a company that was founded in 2001, and since then they have specialized in making custom wheelchairs for cats, dogs, and other animals that are having mobility issues. The Goats of Anarchy Sanctuary knew it would be a challenge to help their beloved Merlin, but they also knew that if any organization was up to the task it would be Walkin’ Pets.

As a matter of fact, even though the Goats of Anarchy Sanctuary was nervous about the endeavor, the engineers at Walkin’ Pets made the whole project look easy. All they had to do was simply change the specifications on one of the existing models they used for their cat and dog clients and suddenly Merlin could waddle like the rest of his duck friends!

Of course, there was no one more thrilled than the founder of Walkin’ Pets, Mark Robinson. He will even admit that he was “thrilled” that Merlin was the first duck that his company could work on. He and his co-workers were even more thrilled that Merlin the Duck literally took to his new wheelchair just like, well, just like a duck to water, as a matter of fact.

Mikayla Feehan is the social media coordinator for the company, and she too was every bit as thrilled that she could take a video of the historic moment that Merlin was able to take his first steps in his new wheelchair. And yes, this wheelchair is designed to work just as well in water, but the company cautions that the handlers of Merlin should avoid salt water because it could eventually break down the metals of the wheelchair.

Indeed, just like Fats Domino sang in 1957, that bird is indeed “walkin’, yes indeed…” He definitely is, no doubt about it!

2 thoughts on “Merlin The Duck Is No Longer Immobile Thanks To His New Wheelchair!”