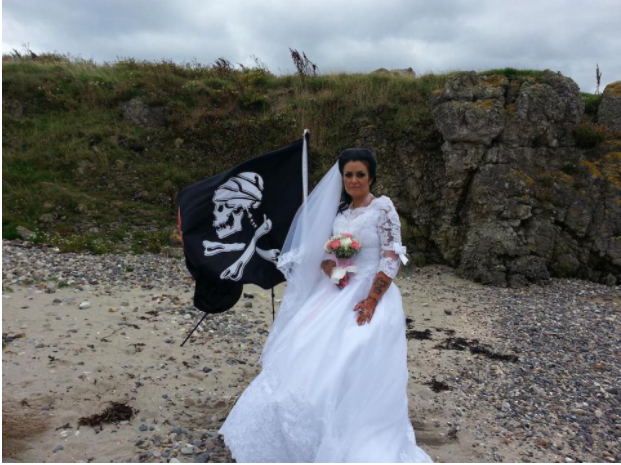 When it comes to marriage, there is no debating that it can be a difficult affair. What with at least half of marriages ending in divorce, it’s not a decision that should be taken lightly. Unfortunately, 45-year-old Amanda Teague is another individual within that long list of those who are in the process of getting a divorce. However, her divorce is a bit unusual, to say the least.

You see, Amanda claims that she is a medium and a pagan white witch. Her soon-to-be ex-husband? Oh, he’s just the 300-year-old spirit of a swashbuckling Buccaneer named Jack. Amanda and her spirit husband first met in 2014 when Teague was depressed and tired of finding a solid man. Apparently, the spirit of this pirate that was executed in the 18th Century appeared next to her in bed and repeatedly tried to woo her. However, Amanda insisted that she wasn’t that type of girl, and Mr. Ghost Pirate would have to marry her before they could make love.

So, in a nutshell, that’s exactly what they did.

Unfortunately, like many other married couples, not all was to be wedded bliss. They encountered trouble almost immediately after the wedding was completed, which was officiated by a spirit medium who obtained the verbal consent of Jack. This unusual couple chose the coast of Ireland in order to tie the knot, simply because the odd marriage would be deemed legitimate over international waters.

Indeed, this marriage went well at the beginning. There was a nice, long honeymoon period, and Teague’s five children were adjusting well to their ghost stepfather. Amanda and Jack were even planning on co-authoring a book to help others find spirit romances. However, even though it’s only been a year since their nuptials, the medium who so vehemently defended her relationship via viral means has now announced that the relationship is coming to an end.

Teague, who has gone by Amanda Sparrow Large, said they had a very normal marriage, and that Jack and her would even have sex often. He said that Jack had the ability to taste and eat through her via “embodiment.” However, Teague’s health began to rapidly deteriorate, and that is when she started to suspect that Jack was stealing away her “life energy.”

Indeed, the more Teague thought about it, the more she realized that Jack probably just agreed to marry her purely for his own selfish reasons.

Thus, she has decided to file for divorce and she is going to show her 300-year-old pirate ghost husband the door. I guess marriage is hard enough between two mortals, but it’s even more challenging when you marry someone from a different plane of existence entirely!