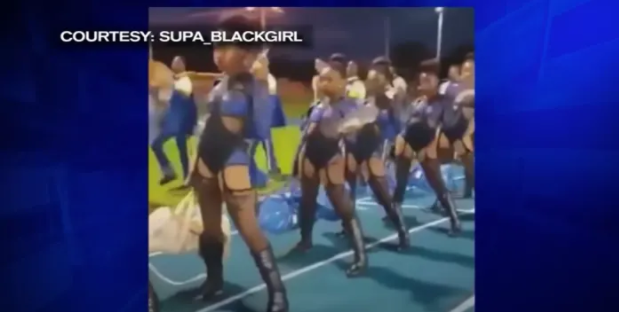 Miami Northwestern Senior High School Principal Wallace Arisitde was forced to issue a public apology after a video of the dance team’s performance went viral. The performance was uploaded by FlyHeight.com, and it showed the team dressed in some extremely racy costumes.

All of the dance team members were positioned on the sidelines of the football field, and they were clad in outfits that consisted of glittery blue and black bodysuits, garters, lacy pantyhose, and high black boots.

Unfortunately, the video went viral for all of the wrong reasons. First of all, this performance attracted some heavy criticism from some people, who slammed the school for their short-sighted decision to allow the young students to wear that kind of costume. To make matters worse, Principal Arisitde originally issued a statement that noted that the costumes had been approved by the parents of the girls.

Arisitde wrote: “All of the parents of these dancers did approve of the attire worn. However, we certainly understand the concerns that were raised and we will implement a more organized, comprehensive, and stringent uniform approval process in the future so that our school may be appropriately represented in the future. We regret and sincerely apologize for any offense that this might have caused.”

While this is a good start, Principal Arisitde still has a long way to go in his efforts to do damage control.

Many viewers not only slammed the outfits, but they also slammed the dance routine as a whole. The video was living proof of this, as it showed the team during their performance. They were not only wearing full makeup, but they were also in high ponytails and they were performing while the marching band was passing by.

The video was captioned by FlyHeight with the title, “Is This Appropriate?” and it drew mixed reactions from cyberspace.

One one hand, there were people who strongly condemned the performance and the skimpy costumes. “For a high school they could have totally went without those garter belts. Its [sic] definitely other ways to make a dance uniform look good.”
“This is a high school dance team!” another person exclaimed. “How in the Sam Hill did the adults think this was even okay at all?”

On the other hand, there were people who ACTUALLY DEFENDED the original routine. Miami Northwestern grandmother Debbie Frasier was interviewed by Local10 and she said: “Well, if they are dancers, then of course they are going to be entertainers. If you have the same problem with them, then do you have a problem with Beyonce’ or other young child stars who are dressed that way on national TV? I should hope so…let’s not be hypocritical now….”

Of course, you’ve now seen the video, so how about you chime in? What do you think about this? Did the school do the right thing by issuing an apology? Let us know!