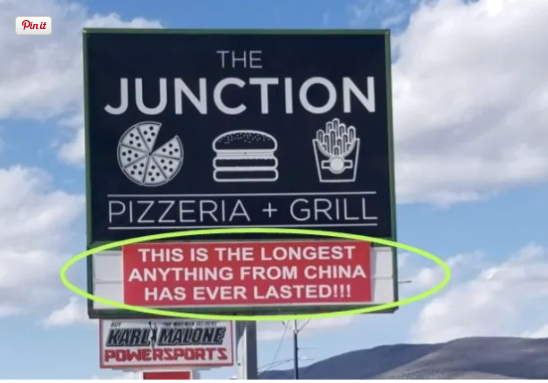 We are definitely living in some very trying times, and different individuals, groups, and businesses are handling it in all kinds of different ways. One restaurant took a humorous – and controversial – approach to dealing with this Coronavirus outbreak.

The Junction Pizzeria and Grill posted a message addressing the COVID-19 outbreak, saying, “This is the longest anything from China has ever lasted!!!” Naturally, in today’s politically correct culture, even this attempt at humor received some mixed reviews.

First of all, there were some who loved the humorous message. “The sign is just about as good as your food,” one individual posted. “Just spot-on hilarious.”

“Definitely a truthful statement,” someone else wrote. “Hilarious, and definitely true. We definitely need some lighthearted moments in these uncertain times.”

On the other hand, there were some people who were simply just not amused at all. They thought it was highly offensive, and that it was a joke in poor taste, to say the least.

“This is disgusting,” one poster wrote. “I am not going to eat here and I’m going to tell everyone I know not to eat here either.”

“I am definitely going to take my dining dollars somewhere else,” another poster commented.

A spokesman for the restaurant discussed the sign with Cox Media Group. Wishing to remain anonymous, he said that the main purpose of the message was to share it “with everyone.” He also shared a message about it on Facebook. “There are some who don’t find the humor in it,” he wrote. “Unfortunately, we cannot please everyone. We wanted everyone to just be able to have a bit of a laugh during this time of serious tests, trials, and struggles. We just want people to have a laugh and some good food, simple as that.”

On the other hand, there were even some businesses that agreed with the restaurant’s humorous message.

There is a neighboring shop called Aspen Grove Rustics. “I don’t think it was meant to offend anyone,” the owner of that shop said. “There simply isn’t any reason for anyone to take offense. They simply meant it to be humorous. They were just trying to lighten things up. It’s not like we don’t all need things like that right now.”

Unfortunately, things kind of came to a head for this Heber City restaurant after someone made a threat of some serious violence over the sign. They said they would commit some serious acts of violence against an employee of the business, and so the restaurant decided to go ahead and remove the sign for now. They filed a police report.

What do you think about the sign that this Heber City (UT) restaurant put up?