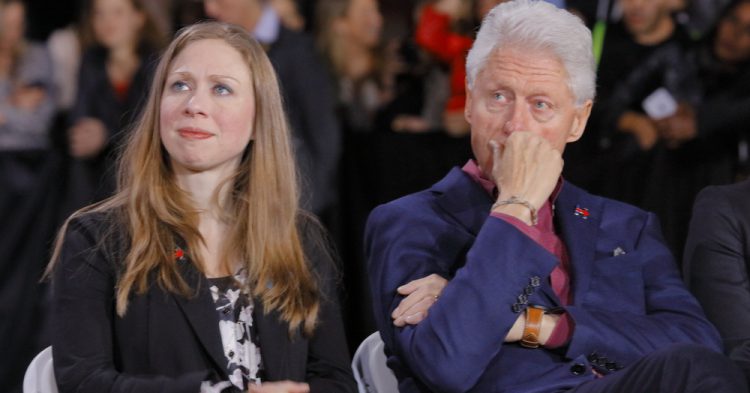 Well, it looks like Bill and Hillary Clinton’s (Webster Hubbell’s?) daughter Chelsea Clinton has an important announcement to make. I’ll just put it this way: if you thought we were done with the Clintons after Trump cleaned Hillary’s clock back in 2016, then think again.

Chelsea Clinton Mezvinsky recently stated that she hasn’t ruled out running for public office herself, following in her mom and dad’s footsteps and getting involved in the REAL family business.

Yes, Chelsea has kept herself very busy over the years, dedicating herself to causes that she is passionate about and being a philanthropist. She has become well-known for her work with her family’s Clinton Foundation, which works to provide economic opportunity for people all over the world.

While she did say that running for office was “definitely a no right now” she said that it depends on how different world events play out. She was promoting her new children’s book at the Edinburgh Book Festival, and she said that various factors would come into play regarding whether she had enough drive to take a crack at it.

“My family is pretty well-represented [in political office],” she said. “However, if that were to change, in an office such as city councillor, mayor, congressman, or senator, I can definitely picture myself running.”

The younger Clinton also told the eager crowd that she “abhors” President Trump and she is disappointed that her mother isn’t president, feeling she would have done an “exraordinary” job.

Of course, people at this book festival were also trying to pry some juicy details regarding how her mother handled her upset loss to The Donald. Clinton remained private, as always.

In regards to her mother, she simply said the following: “She is continuing to move forward, even though she is very disappointed. She wants to have a positive impact in politics, and that is something I have seen from her my whole entire life.”

On the other hand, she also said that she is focused on other things at the moment besides running for office. “I’m much more outraged right now that President Trump is separating families at the Mexican-American border.” Hopefully that keeps her busy…..EGAD….

Do you think that this country should have another Clinton in the White House or another high office? Let us know in the comments!

7 thoughts on “Have a Hunch About Chelsea Clinton? Well, She Just Confirmed It For You”