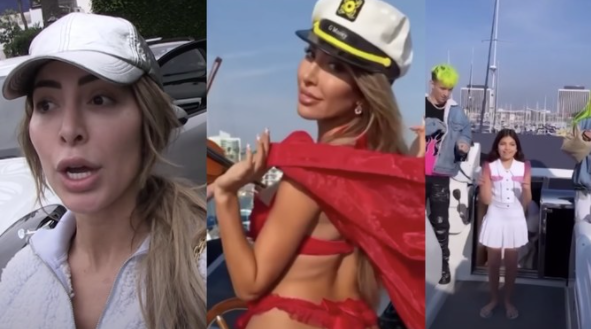 Farrah Abraham, the reality television personality who was born in Omaha and raised in Council Bluffs, Iowa, and who first rose to prominence in the reality television series “16 And Pregnant” in 2009 is making some new waves, and not necessarily in a good way. She recently appeared in a new video that highlighted her stunning doctor-assisted physique, but not isn’t the reason she was being picked at.

It seems that some have taken issue with her parading around in lingerie with her derriere in full view, but that isn’t necessarily the issue either.

For most people, the issue was that she was doing all of these things with her 10-year-old daughter Sophia looking on.

Abraham posted the video on Instagram, and she had the caption, “Would you like to go on a yacht cruise with @farrahabraham as your captain?” She is seen dancing in a very revealing red bikini, complete with a captain’s hat that reads “G Money” and she is blowing kisses to the screen. Her daughter looks on and seems amused.

Of course, while she got a lot of support for the video, including likes, positive comments, and other plaudits, she also got involved in her share of controversy as well. Some of these comments just weren’t very positive at all.

“You will do anything for money,” one fan commented. “Wow, just wow.”

“Class act!” another fan wrote sarcastically. “That, and the fact that you hang out with Courtney Stodden makes me wonder just which one of you is more messed up?!”

“Oh, Farrah, you are just so desperate,” another follower said.

Several comments poked fun at her derriere, saying that it looked all “strange and lumpy” and that she should sue the person who gave her the injections for it.

However, luckily for Farrah, not all of the posters were so mean-spirited, and many were happy to show their support.

“Let the woman live her life, damn,” one person wrote.

Even though Farrah’s Instagram following is declining, she continues to be persistent, highlighting her travels, business interests, and many other appealing things. She may not be quite as big a reality television presence as she used to be, but she will continue to reinvent herself and remain in the limelight for as long as possible.