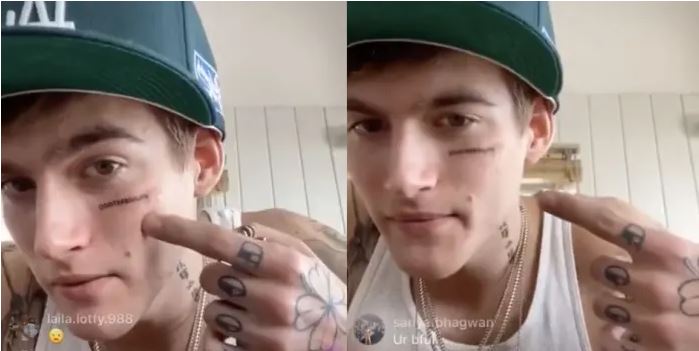 Cindy Crawford’s son Presley Gerber has recently been making quite a few waves lately. Besides the fact that he has followed in his mother’s footsteps and is also a model, it appears that he recently made a decision that not everyone is necessarily agreeing with…

Apparently, Gerber has decided to get a face tattoo, and many viewers are not only giving him a hard time about that decision but also about the message that he is trying to get across.

Presley Gerber is the son of Cindy Crawford and Rande Gerber, and the kid is 20 years old, so it’s his life and it’s his face, too. He went to tattoo artist of the stars JonBoy to get this work done.

It seems he had the word, “misunderstood” prominently placed under his right eye, and visitors to cyberspace are not having it. (“cyberspace”? Yeah, I know, showing my age here LOL) Presley had several less-than-supportive comments regardng it.

“Are face tats becoming the trendy thing now?” one person commented. “Sweet Lord, the only thing that is ‘misunderstood’ would be that poor canvas of yours!”

“Come on!” another individual commented. “You’re not really that misunderstood. You have all kinds of money at your disposal, and so you must be very bored, to say the least.”

Needless to say, Presley Gerber definitely got a lot of hateful comments regarding this decision, but he didn’t take the criticism lying down. He decided to address the issue by doing a response video on Instagram.

“If I believed that this would mess up my face or if it wasn’t something I wanted to do, I wouldn’t have done it,” he said. “People forget the obvious. If you don’t like the tattoo, why don’t you face me in person and then critique it?”

Using some ugly language, Gerber also said, “F____ you if you don’t like it!”

He also said, “People can get facelifts, change genders, and they might even get lip injections, and if you mention it to them they will get offended. I get a little face tattoo and all of a sudden everyone goes crazy. Why do people love to hate me….hmmmm?”

Of course, it seems like Mr. Gerber can’t catch a break at all, because there were a few people who got offended that he compared getting a face tattoo to being transgender. I guess the poor guy can’t win for losing.

But like I said, it’s his life, and it’s his face.

What do you think about this decision by Cindy Crawford’s son?