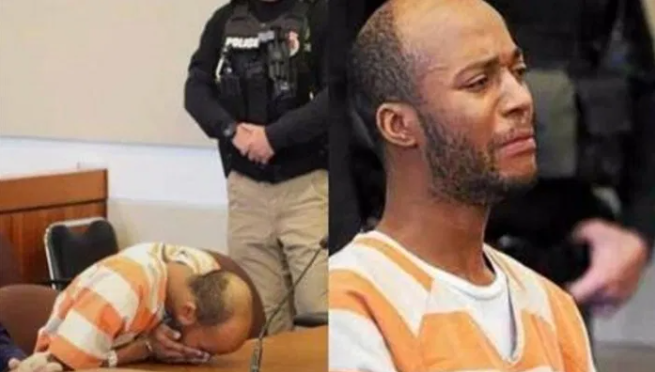 After they sentenced an Ohio man to life in prison without the possibility of parole for the sexual assault of a 2-year-old girl, he stood up and made a startling admission.

You see, despite this sentence, Devante M. Gibbs has continually maintained his innocence, telling the court that it isn’t possible for him to have raped the little girl simply because she had chlamydia and he doesn’t have it himself.

Gibbs, 24, was convicted of two counts of child endangerment, two counts of kidnapping, and a count of felonious assault and rape.

They filed the charges on this man by September 2013 after he allegedly assaulted the young girl and then placed her in a bathtub with extremely hot water to try to destroy the evidence. Interestingly enough, he was able to flee the Lorain County Justice Center while they were deliberating. Of course, it didn’t take long for the U.S. Marshals Service to track him down. They apprehended him at a family member’s home in Long Beach, California on February 18th and extradited him back to Ohio in March. If you’re thinking that these aren’t the actions of an innocent man, then you’re not the only one, believe me.

When it was time for him to be sentenced, Gibbs read a statement. In a nutshell, he denied committing the crimes and said he had sought counsel from a private investigator to try to help him get his name cleared.

“I honestly thought truth, facts, and justice would prevail. I risked getting a life sentence simply because all you have to do is bring up the facts, you can easily see I didn’t do this horrible thing to her.”

Gibbs also added that he is committed to bringing the real perpetrator to justice.

“I realize that I am headed to prison for a life sentence, but I am not the monster that would do this,” he said. “It doesn’t matter what the jury verdict is, I would never sexually assault anyone, let alone a baby.”

Throughout the trial, Gibbs insisted that he did not assault the little girl, but he did claim responsibility for the burns she had. He told the jury that he drew a bath for himself and went outside to smoke a cigarette but when he came back in he realized the child had climbed into the water. He said he didn’t get into the bath right away because it was too hot.

Gibbs also continually discussed the chlamydia infection that the girl had. He said that he didn’t have it and that should be enough for a not guilty verdict.

The girl was in the hospital for a whole month because of the burns. She also had numerous internal injuries and an infection that almost killed her. She was described by assistant county prosecutor Stephanie Malanowski as being at “death’s door.”

Before the sentencing, Malanowski read off a statement from the victim’s mother, who currently resides in another state and wasn’t able to attend the hearing.

“Throughout this trial, Gibbs has proven beyond a reasonable doubt that he is a disgusting human being, not showing any remorse for what he has done to my daughter,” the statement began.

The statement also described how the victim now lives in fear. She is scared to bathe, embarrassed by the scars from these burns, and traumatized by the whole process.

“I will have a very hard day ahead of us very soon, because when she is older and smarter, I will have to sit her down and tell her why these scars exist,” the letter said. “It is a terrible nightmare to have to look my daughter in the eye and explain to her how someone could be so evil and violate a 2-year-old’s innocence.”

Among the reasons why they sought the maximum punishment would be due in part to her age and the brutality of the crime.

Brian Darling, Gibbs’ defense attorney, says he thinks his client is going to appeal the sentence.

One thought on “After Being Sentenced to Life in Prison For Raping a Two-Year-Old, Perpetrator Stands Up and Makes Unexpected Admission”