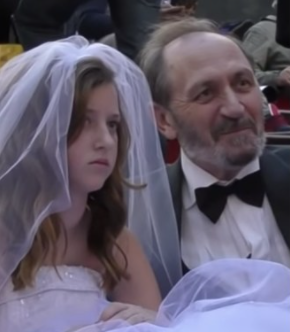 It seems there were some newlyweds in Times Square, much like many other couples are wont to go. However, many passersby immediately realized that there was something wrong about this particular newly-married couple.

You see, in this case, the “groom” was a 65-year-old man and his “bride” was nothing more than a 12-year-old girl. Moreover, the groom had a big smile on his face, but the bride appeared to be frowning. In fact, she didn’t appear to be happy about the situation at all.

The man and his much-younger bride posed in various parts of the square, and it didn’t take long for certain people to start noticing the odd event. First of all, one woman asked the girl, “Where is your mom?” The little girl did not comment, but the man answered for her instead, simply saying that the girl’s parents gave him permission to marry her. The woman became just a little bit irate, asserting that “You’ve got to be kidding me!”

There was yet another interesting encounter between the bride and groom and a young man. To make a long story short, this young man simply wasn’t buying this arrangement at all. First of all, he questioned how old the girl was, and then he proceeded to question the whole thing.

“This is B.S.! This is not right! I’m sure if we called the police, you’d get locked up!” the man shouted. The man attempted to approach the unusual couple, but the “groom” quickly brushed him aside, saying they had brought along some security to ensure their safety.

Finally, there was another woman who took it a step further. She actually tried to take the 12-year-old girl’s hand and take her away from her alleged much-older husband. However, the old man refused to let her go, even though the woman was repeatedly asking whether the little girl even wanted to be there in the first place.

Although this might seem like one of the most disturbing stories ever shared on this blog, there is a happy ending to this story. First of all, it’s important to note that this wasn’t a real marriage between a 65-year-old man and a 12-year-old girl; they were just acting out a part. Secondly, this was just a social experiment done by YouTube celebrity Cody Persin to highlight the fact that child marriages are legal in 91 countries across the globe and even in a few parts of the United States.

Simply put, he did this to raise awareness about how girls right around this age are robbed of their childhood and married off to much older individuals throughout the globe. Indeed, in some places, the children are as young as six. It is definitely something that should not be taking place in the 21st Century.

What did you think about this social experiment? Was it effective at raising awareness of this worldwide social problem?

53 thoughts on “65-Year-Old Man Takes Photos With His 12-Year-Old Bride, and Then People Start Noticing”